If any of you have been to the Sinner's Burlesque shows in the last 6 months ago you will know that we have gone back to using a "midnight" windlight setting for our shows. 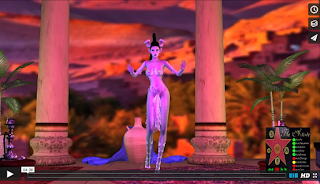 When I first came to SL, most shows used this windlight and dancers used face lights which made them look like mini-lighthouses as their face lights were just that - attached to their chins.  Back then I experimented a lot with different body lights and using glow orbs to simulate spotlights but I was never satisfied.

For everyday use I have my windlight set to Starley as I love the crisp look for skins and objects.  We have had forced windlights using this setting at different theatres but again, people can just choose to ignore that and the whole effect is ruined.

So I started thinking about the whole lighting issue all over again.  It would be nice if we all had the processing/graphics capabilities to watch shows in Advanced Lighting, but most people have enough difficulty with lag as it is.  I concentrated on ways that we could make something look interesting with only normal lighting enabled.  It is simple enough to attach invisible lighting prims to sets which will give the desired effects and are not much different to stage lights with colored gels.

For this particular routine I wanted to try something different.  There is a function of the palette which can turn lights off/on and dictate colors.

I used this in two palettes which were then made invisible and kept as "movers".  One was "red" and placed at one side of the stage and the other was "blue" and positioned at the other side.  I made one palette slightly higher than the other so that the colors would stay more distinct.  The palettes were then programmed to move back and forth across the stage at the same time a number of times.  My avatar was also lit by a "white" panel at the front of the stage.  If you watch the skin of the avatar you will see the lights playing across the skin.   I have also included a reference diagram and then filmed part of the routine with transparency enabled so that you can see the moving palettes.

You can watch the video here

Enjoy!
Posted by Aura Fitzgerald at 12:50 PM No comments: