Your Heart is as Black as Night 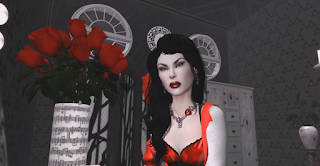 Watch the Video ==> Your Heart is as Black as Night

BREAKDOWN OF THE "YOUR HEART IS AS BLACK AS NIGHT" VIDEO

Rezzed a palette (01_A) and set its position.  Sat on palette and adjusted position. Chose suitable bow animation which I placed in the palette for simplicity.

Took the "guts" out of a palette and loaded them into the Stage Curtain, re-naming it "01_B"

Simple up and down move.

First shot shows the hallway with the swinging light-bulb.  I Attached a palette to the bulb array and used the swing function.  Took a while to work out which axis to use but once I got it I could use the size of the palette object to obtain a suitable arc and speed of swing.

Second palette "walks" me down the hallway and out through the end.

I replaced the dressing room door with a palette to animate the swing open and closed.   The trick is to have the original door then create an identical invisible prim.  I attached both of these to a central "rod" which was the palette.  This allows the door to pivot on a central axis i.e where the door hinge would be.  I set the two movements at a different speed: swinging open faster than it swings closed to suggest a push opening it and then the door swinging closed under its own steam.

Second palette, as a mover, was propelling my avatar through the door.  Trick was to get them lined up so that you had a reasonable interval between the door opening and me coming through it.  Its very quick so I had to find a way to get around the 5 second interval in events.  I could have used one palette to trigger the other but for expediency, as I was filming and not performing live, I adjusted by altering the length of a dummy move in the mover palette which came before the walking animation.  I could then adjust when I started walking.  Just another way of doing it, there are several ways it could have been done, some of which would be much better for a live performance.

Yumz and I talked long ago about the old "flipping the clothes over the dressing screen" trope.  Again, because it is filmed rather than live I could fudge a bit with editing, but it could be done live with some more playing around.  The bits of "dress" (a mesh shape and some flexis) were attached to a cylindrical palette which was sitting on the top edge of the screen.   I had envisaged that it would be one straight rotation to flip it over but I actually used a couple of tiny linear moves (up and forward) as well to make it look a bit better.

The one thing that I would have liked to do better was when she came out from behind the screen..obviously in real life we don't walk in discrete lines with angled turns but rather automatically start to turn our bodies as we walk.  It would be possible to track this on a palette but the problem is actually the animation as it could look very odd unless you found the perfect walk.  Plus it was a very cramped space between the screen and the armoire.  Anyway, standard walk turn walk... might have looked better with a pause and an animation before she turns.

The rest of the action is pretty straightforward...palette used to position the sits at the dressing table etc.   The very last shot where you see the police lights in the window didn't capture that they were actually on a mover and slowly moved up into shot behind the windows.

That was purely to do with the tracking speed of the camera I was using.  I had originally wanted to pan down on to her as well so that you could see the poster above the dressing table was for a movie called "Meet John Doe"  :D

Anyway I hope that has given you a useful insight into the making of the video from a technical point.  This was originally planned years ago as a stage piece and believe it or not, everything was possible to do live!  The original would have been much more focused around dance and emotes though.

I changed the look of the piece a lot for the video, deciding to give it a much more film Noir feel.  The sets were kept to greyscale for that reason but each splash of red has its own significance.  The dress and the underwear, the "Sinners" sign almost like an entrance to Hell; the roses were the love and passion and the make up the artifice each one builds up until eventually it leads to the blood on the sheet.  She takes off one layer of red but she is still "red" underneath.

Anyway I hope you enjoyed it!  It has had wonderful responses so far.   I hope you will leave your comments too :)