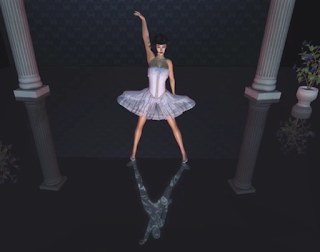 I haven't made a video in a while and  had been itching to get back to it, so I finally went for an idea that had been kicking around for a while.   I really love the illusion of deep reflections that you see in some clubs and stores.  If you have ever looked at how its put together you will have seen that they just flip the set up and put a semi-opaque "floor" between.   I figured that if you could do that with a room then why not with dancers?

Yummy and I had discussed a long time ago the concept of using some kind of reflection but obviously it has its limitations with  live performances.  I did start working on something a while back that would have worked around this by using a tilted stage but got distracted...look a squirrel!!

Anyhow... I had the skybox with the pillars etc set up and had been playing around with it in photos, so I figured why not.

I used an anchor but in this case I didn't have to include any movement with the palettes.  I could have used Yummy's adjustable poseballs I guess but I like the smooth adjustments of a palette.  Plus they are boxes so you can easily see which way up they are.  The key thing with this one was getting the alignment of the avatars as close as possible.  Now because I wasn't using two avatars with identical feet this could be a bit tricky at times because the mesh body I was using for the hologram effect below had a very stiff rigging for its ankles and foot movements so it was never going to be exact.  Haven't tried it out with two identical avatars but it might work a lot better.

As you probably guessed, its just a matter of flipping one palette 180 degrees.  I used mirrored dances from Abranimations to match the moves and the AB system in The Artiste to regulate the dancers.

Technical point for filming: if you let the "under" dancer go out of frame when filming then the system "ignores" it as if its not there, so when you bring it back into frame the animation starts over for that avatar, meaning that your dancers are out of sync.   If you are filming and synchronised dancing then make sure you keep even just a little bit of the other dancer in frame.  Otherwise you just have to edit your way out of a mess.

The second avatar is wearing an old experimental mesh body that will take scripted textures, so that is how the "hologram" effect works.   Again, something left over from another old routine that never made the cut.

My editing is a bit lazy,  I still need to work on matching one take to another as far as the choreography is concerned.  So forgive me if the moves seem a bit repetitive in places.    I now appreciate more than ever how much time Sterling used to spend matching the shots.  However the main concern here was showcasing the effect for Yumz and matching to the song's cadences.

You can watch the full video HERE


Posted by Aura Fitzgerald at 12:35 AM No comments: